The story of the episode begins some time after the events of the first Zombeh Attack. Edd, Tom and an unknown woman attend Tord's funeral. After the funeral ceremony is finished and the others have left, Edd puts Tord's spoon and fork that he used in the first Zombeh Attack on his grave before leaving. Shortly after Edd leaves, lightning strikes Tord's spoon and fork, causing Tord to rise from his grave. The newly revived Tord makes his way to Edd's House in order to find Edd. Tord finds Edd and requests to enter his house. After Edd refuses to let Tord in Tord enters Edd's Car, forcing Edd to let him in. Tord then reveals that he needs the help of Edd to find the Necronomicon in order to free his spirit from the Zombeh curse and that if Edd doesn't help, he will eat his brains. The two then get into Edd's car, but Tord accidentally tears one of his legs off by slamming the car door on it. Edd and Tord then travel to Bittensborugh, running over Zombehs Kim and Katya on the way.

Meanwhile, Matt rises from his grave similarly to Tord and makes his way to Tom's Apartment in order to seek Tom to help him find the Necronomicon. Matt finds Tom and whilst trying to explain the situation to Tom, Tom throws up on his shoes before joining Matt on his journey. Later at a cross-section in Bittensborugh, the two groups briefly meet up, causing Edd to accidentally crash his car. Realising that Matt is also after the Necronomicon, Tord wants to beat Matt to the Necronomicon, so Edd suggests a shortcut through an alley. On their way through the shortcut, Edd and Tord come across a horde of zombehs. After engaging in a brief battle with the Zombehs the two become overpowered run away from the fight.

After Edd and Tord's skirmish, Tom and Matt are making their way safely to the Necronomicon, on their way the two encounter a pedestrian, who asks for Tom but is eaten by Matt, which annoys Tom. The two then arrive at the Necronomicon's resting place. Here Matt discovers there are two decoy books as well as the real Necronomicon. Before he can open one of the books, Ash Williams takes the book Matt was reaching for and opens it, causing his head to explode and send blood flying into Tom's face. Matt chooses to open another book, but gets sucked into it. After this, Edd and Tord arrive, wondering where Matt went. Tord then opens the last remaining book and says some magic words that cause spiritual hands to cover Tord's body and free his spirit. Edd sadly watches Tord's spirit ascends into the sky. Tom then tells Edd to get him drunk, and the two walk away. Suddenly, Matt's hand punches its way out of the fake Necronomicon that he was sucked into, and the screen fades to black. 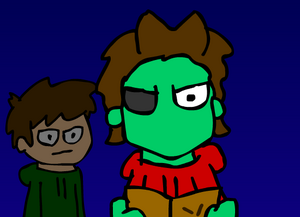 Click here to view the image gallery for Zombeh Attack 2.

Retrieved from "https://eddsworld.fandom.com/wiki/Zombeh_Attack_2?oldid=64498"
Community content is available under CC-BY-SA unless otherwise noted.