Zombeh Attack 2 (Chronologically)
Behind the Scenes of Eddsworld (Release)

Zombeh Attack is the first installment in Edd's Zombeh Attack Trilogy. It was inspired by The Evil Dead and Shaun of the Dead.

The film starts with Edd, Tom, Matt and Tord in a van driving down a dark road while the theme tune from Shaun of the Dead plays in the background. Suddenly, the van crashes into a man running away from something, which causes the van to flip into the air and land in a cemetery. With the van now broken, Edd decides to go into the nearby town of Bittensborugh. While walking through, Matt decides to ask a zombie (also known as a Zombeh) for directions, which causes the zombeh to tear his arm off. Edd decides to ditch Matt, with Tom and Tord soon following. They stop to catch their breath, but they then see a massive horde of zombehs crowded around a petrol station. The zombehs see them and start to slowly walk towards them. Edd just decides to run away again, and Tom and Tord agree with him.

Tord then explains that they need a safe place to hide in, which also needs to be camouflaged. They decide to hide in a portapotty, placing an 'Out of Order' sign on the outside as "camouflage". Edd then says that they need weapons, so Tom looks out the hatch on the top of the portapotty and looks out for some places where they could find weapons. Out of a weapons shop, a knives and weapons shop and the local mall, Tom picks the mall. A montage of weapon shopping is then shown. Edd gets a chainsaw, Tom gets a shovel and Tord almost gets a gun, until Edd and Tom switch it for a fork and spoon. Tord then explains that they need to attack the zombehs by surprise and then they all jump out, ready for battle, only to realize that no one's there. With shocked expressions on their faces, Tom collects the repair kit for the van. When they turn around, however, the Zombeh horde is there... and the leader of the horde is none other than Matt, who is now a zombeh himself. Edd is shocked and confused, but Matt explains that he was bored of laying there while festering. Matt then orders the other zombehs to attack.

Edd, Tom, and Tord then start to kill all the zombehs, but in the process, Tord gets bitten. However, Edd seems to care more that the Coke Machine got broken, before Edd and Tom run away to the van and drive out of the cemetery. Zombeh Tord then stands up in the back seat and lunges at them.

Zombeh Attack was removed from YouTube in March of 2014 due to copyright infringement. It, as well as a few other episodes have been remastered and re-released on the Eddsworld Legacy channel as of March 16, 2016. The original version is still available on Newgrounds. 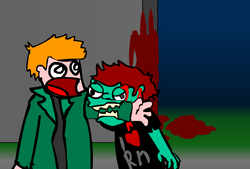 Retrieved from "https://eddsworld.fandom.com/wiki/Zombeh_Attack_(Episode)?oldid=64516"
Community content is available under CC-BY-SA unless otherwise noted.