Zanta Claws II was the 2008 Eddsworld Christmas special and proved to be the most popular episode yet, featuring on YouTube UK due to its sheer number of views. As Zanta Claws makes a feeble attempt at killing Edd, Matt and Tom, the gang set out to the North Pole to finish Zanta off once and for all.

Edd, Matt and Tom are watching TV when the doorbell rings. Edd answers the door to find a group of carolers standing at the door, who sing about Zanta Claws kidnapping Santa, shortly before exploding. The explosion only injures Edd's foot and covers Matt's face in ashes, and the titles begin.

The gang sets off to save Christmas once again. The trio buckle up in the car when Tom questions how they are going to get to the North Pole in a car. Edd replies by using the Z gear, which somehow causes the car to start flying. A confused Matt asks how a car could fly, causing the car to plummet onto an aeroplane. When the pilot of said aeroplane asks how aeroplanes can fly despite their weight, the aeroplane falls onto another aeroplane, and the process repeats for the other planes. The trio eventually make it to the North Pole, while on a stack of 6 other aeroplanes.

Meanwhile, Zanta observes the trio and is infuriated by the fact they managed to survive his explosive carolers. Santa tells Zanta that he should do something nice for once since the latter is some kind of Santa Claus. With that, Zanta decides to "give [the trio] what their hearts desire".

The trio find Zanta's Castle, and they find three presents addressed to each of them by the entrance; Tom gets eyes, Matt gets stacks of money, and Edd gets a cola-filled pool. Their presents end up burning them in some way.

The trio burst into Zanta's castle. Zanta, after pointing out Tord's absence and unsuccessfully asking to take his place, Zanta comes up with a new plan; he swaps hats with Santa in an attempt to fool the trio. Amazingly, only Tom, now armed with a gun that seemingly came out of nowhere, as Matt and Edd point out; is fooled. In the panic and confusion, Tom shoots the wrong Santa. Zanta chuckles and decides to "finish the job" by shooting Santa with a laser pistol. Tom dives in front of Santa to save him as Zanta fires, causing the laser to bounce from Tom's eyes and hit a chandelier, crushing Zanta. Matt and Edd are celebrating with Santa, as Edd jokes "Santa, I'm so glad to see you made it!" The scene shifts to Tom, with his eyes now burned off, muttering "I hate Christmas". The credits roll. 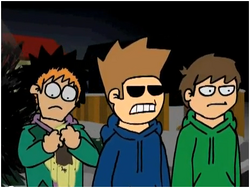 Retrieved from "https://eddsworld.fandom.com/wiki/Zanta_Claws_II?oldid=64272"
Community content is available under CC-BY-SA unless otherwise noted.