Zanta Claws was a Christmas-themed villain who closely resembles Santa Claus, in terms of attire that is. His first appearance was his own titular flash Zanta Claws. He returned as the antagonist in Zanta Claws II, and made his final appearance in Zanta Claws III, as a villainous protagonist, where he puts himself to rest in Edd's living room.

Zanta makes his debut in Zanta Claws. He takes Santa's place in checking who's naughty or nice. Unlike Santa, Zanta eats the heads of naughty children, devouring a boy's head at one point. Zanta encounters the Eddsworld gang spying on him. The Eddsworld gang are apparently not "good" this year and so, Zanta Claws gives chase. Later, he corners the gang on a Coca-Cola truck. As he approaches the gang to attack, the real Santa Claus intervenes and punches Zanta Claws.

The presents he gives the gang burn them in some way; Edd's cola pool burns his skin and clothes, the sun burns Tom's new eyes, and Matt's money spontaneously combusts. Once the gang confronts him, Zanta swaps hats with Santa in hopes that the gang wouldn't be able to tell the difference. Tom shoots the wrong Santa and Zanta pulls out a laser gun to "finish the job". Tom quickly jumps in front of the laser which bounces off his new eyes. The laser hits a chandelier which crushes Zanta.

Zanta makes his third appearance in Zanta Claws 3. Zanta encounters a disgruntled Tom and takes him for a ride on his sled. Zanta tries to ally with Tom, but he turns on him and drops him from his sledge. Zanta briefly joins the gang and orders a van that transforms into the Boxmas Bot to combat Tom. At one point during the fight, Zanta is launched into the sled for a guitar duel with Tom. Zanta and Tom are both shot down when Matt, Edd and Santa realize they are both the bad guys.

At the end of the episode, Zanta reveals he has hated Christmas ever since he died and Santa has taken his place. He decides to go back to being dead and digs his grave in Edd's living room.

Zanta makes a brief reappearance in the episode Christmas Eddventure. He reemerges from his grave and announces his return, but Tom stomps on him and covers him with an armchair before he could say anything else. 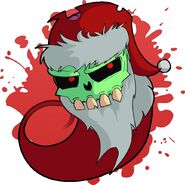 Zanta as drawn by Anthony "Kr3id" Price, the animator of PowerEdd.

Zanta coming out of his grave
Add a photo to this gallery
Retrieved from "https://eddsworld.fandom.com/wiki/Zanta_Claws_(character)?oldid=62293"
Community content is available under CC-BY-SA unless otherwise noted.