Yanov voiced a character wearing a blue dragon suit in Eddsworld 20k, a video made in celebration of Edd's 20,000th page view on sheezyart. He is one of many who yell "Eddsworld!"

A zombeh resembling Yanov can be seen. Yanov also provided the voice for the first pilot of the helicopter. He tells the second pilot (Paul) that there "doesn't seem to be any survivors", and guns down Edd, Matt, Tom and Tord. 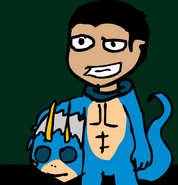 The zombeh resembling Yanov
Add a photo to this gallery

Retrieved from "https://eddsworld.fandom.com/wiki/Yanov_Cutajar?oldid=50524"
Community content is available under CC-BY-SA unless otherwise noted.