Xmas Day: Eddsworld Christmas Special '09 is a Christmas-themed animation. It is a poem written by Edd Gould, narrated by Josh Tomar and set to an arrangement of "Santa Claus is Coming to Town" by Thomas Ridgewell. The song's story involves Edd, Tom and Matt's misfortunes during what seems to be their worst Christmas ever.

The title of the Christmas Special.

Edd, Matt, and Tom get their presents.

Matt gets a joke book, with only one joke.

Tom receives a poster of Matt admiring a toaster.

The cards they read increased their woe, were letters from fans.

Matt has a "pleasant" chat with his grandma.

The others were famished! 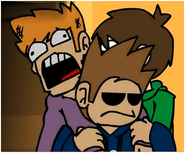 Tom rescues Matt from the fire.

Everyone sits down to watch TV.

Their sad faces were soon transformed into merry.

The TV goes out.

(Then the video plays again with no audio... Weird right?)
Add a photo to this gallery

Retrieved from "https://eddsworld.fandom.com/wiki/Xmas_Day?oldid=64390"
Community content is available under CC-BY-SA unless otherwise noted.