"[He] Was shown driving away at the beginning of an eddisode [25ft Under the seat]... it just opened up this Pandora's Box of crazy fans that never left him alone to the extent that he now can't use his real name. PLEASE LEAVE HIM ALONE."
— Thomas Ridgewell

Tord Larsson was an online friend of Edd Gould whose animated counterpart appeared in Edd's animations and comics. He is of Norwegian descent.

Tord was first brought in by Gould to draw comics for his website.[1] He and Gould became close friends, which led to Tord gaining an animated counterpart, first appearing in the 2004 Christmas Special.[2]

Tord quit in 2008, but was still on good terms with Edd. He claimed that he wanted to pursue his own artistic career, and not "mooch off of Edd." When he left, he insisted Edd should also remove his animated counterpart. The beginning scene in 25ft Under the Seat was a result of this. Tom would later criticize the scene, and Edd himself would later state in a vokle that this was his least favorite scene in any of his animations. Edd, when asked by a fan on his "Origin of Eddsworld" journal post on DeviantArt, said he and Tord still kept in touch.[3]

Shortly after learning about Edd Gould's death in 2012, Tord made a video explaining why he left Eddsworld.[4] Some time later, he deleted the video and the channel it was uploaded on. Matt was keeping Tord updated during this time.

In a 2012 vlog, Tom said Tord's reason for leaving was due to the Eddsworld fan base and the attention it was giving him. According to Tom, it reached the point where Tord could, and still cannot use his real name online.[5] The only part of Tord's video that still exists is in Tom's video "Your Eulogy", where he drank a bottle of Cola in the name of Edd.

Tord's animated counterpart reappeared for the Eddsworld: Legacy finale, The End, although he was voiced by Jamie Spicer-Lewis.

Tord posted a link to a userpage on Encyclopedia Dramatica.[10] 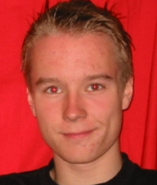 Tord and Matt sitting at a table 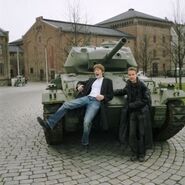 Matt (left) and Tord (right) leaning against a tank

Retrieved from "https://eddsworld.fandom.com/wiki/Tord_Larsson?oldid=64054"
Community content is available under CC-BY-SA unless otherwise noted.