Tom is a main protagonist in Eddsworld and the animated counterpart of Thomas Ridgewell.

Tom wears a blue hoodie, large spiky hair (he called it "Steve" in "Moving Targets"), no eyes, and a spherical head. Sometimes, Tom is shown to have dark blue jeans whereas at others to have normal grey leg-wear. He wears checkered shoes which are the set out the same way as a chess board. Tom is the shortest compared to Edd, Matt, and Tord.

Tom's eyes started off as a black line, but later transitioned into empty, black sockets. He inherited this peculiar trait from a bowling ball (considered Tom's "mother").

In a second Tumblr post made after the end of Eddsworld: Legacy, the real Tom stated that Tom's black eyes came about from a suggestion he made to Edd after noticing that he would often draw Tom with hollow white eyes when he was shocked. Tom suggested Edd replace his character counterpart's unibrow with black circles for easier animation. Tom meant for them to be fully black eyes which were caused by the counterpart being possessed by a demon that would take control of Tom's body in moments of extreme anger. Edd decided to take his own approach to the new look and portray them simply as empty sockets.

Tom seems to have a more consistent portrayal throughout his appearances. Tom is generally portrayed as cynical, pessimistic, and cold. Tom can be smart or stupid depending on the situation. Tom does not usually get along with others such as Matt or Tord, and does not enjoy Christmas. Tom is addicted to alcohol, particularly Smirnoff, and cares deeply for a bass guitar (which Tom calls Susan).

Tom from the Future 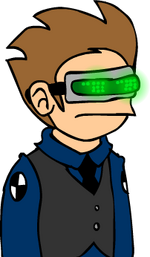 Tom's future self appears in "WTFuture" with Future Matt to the present with an extra time machine to stop Edd's future self from killing the "present" Edd. When the present Tom sees Tom from the future, the former asks about the high-tech visor in place of the latter's eyes. Tom's future self reveals that taking a laser to the face and developing cancer resulted in the visor being there.

Retrieved from "https://eddsworld.fandom.com/wiki/Tom?oldid=64313"
Community content is available under CC-BY-SA unless otherwise noted.