This is a gallery for The Snogre.

"Maybe one more." (Ringo can be seen in the top right corner)

Edd's snowman about to sing

Edd looking up at the Snogre

"Save me, my wintery brethren!"

"Anyone else feel kind of melting-y?"

Original screenshot (before the second floor of Edd's house was added)

A smear
Add a photo to this gallery

Line art for a scene from the eddisode

Rough line art of the plane.

Darker line art of the plane (with clouds).

An explosion being animated for the Snogre's death

The original animation of Paul's character, which was later reused for the episode 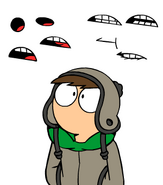 Mouth animation test.
Add a photo to this gallery
Retrieved from "https://eddsworld.fandom.com/wiki/The_Snogre/Gallery?oldid=60626"
Community content is available under CC-BY-SA unless otherwise noted.