This is the gallery for The End, the finale of Eddsworld: Legacy.

Elliot Gough editing the soundscape for "The End (Part 2)"

A preview posted by Paul ter Voorde on Tumblr

A preview posted by Paul ter Voorde on Tumblr

Paul animating a scene for an upcoming animation time lapse (from his ask.fm) 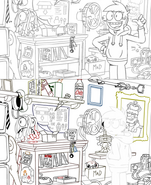 The shadowy figure from the MCM Comic Con preview

A GIF file uploaded to Twitter by Paul ter Voorde

Screenshot of The End Part 1

Screenshot of The End Part 2

A teaser showing the sinister looking guy from WTFuture

"Yeeeah and we kinda got banned from ever going there again..."

Edd and Matt fishing when....

...Tom brings out his harpoon gun!

The Rescue Whale from one of Weebl's videos

The gang returned home from fishing

"What happen to the chairs?"

"Wow... It looks like you had lots of adventures while I was away..."

"I wish I could've been here."

"We've got plenty of catching up to do."

I am NOT your friend!

Tom's Drawing
Add a photo to this gallery
Retrieved from "https://eddsworld.fandom.com/wiki/The_End/Gallery?oldid=60625"
Community content is available under CC-BY-SA unless otherwise noted.