Susan is the name of Tom's bass guitar. It is a Fender Precision Bass with a Stratocaster pickguard and is easily Tom's most prized possession.

Susan first appeared in Ruined, when Edd used it to kill a spider and broke it in the process. In subsequent episodes, Susan has bandages around its neck and tends to get destroyed.

In real life, Tom's bass is a Music Man Stingray 4.

Tom retrieves Susan from the safe. 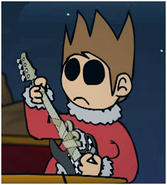 Susan in real life.
Add a photo to this gallery
Retrieved from "https://eddsworld.fandom.com/wiki/Susan_(Tom%27s_Bass)?oldid=50164"
Community content is available under CC-BY-SA unless otherwise noted.