Money (That's What I Want)

Spares is an Eddsworld animation by Edd Gould. It was released on May 16, 2008.

Edd, Matt, Tom, and Tord are watching a film (The Big Named Monster), clearly enjoying it. The movie ends and the gang leaves the cinema while commenting on how good it was. On the other hand, the evil director, Christopher Bingbong (better known as Bing) is frustrated that his movie was a commercial failure, getting only four viewers. Larry, his assistant, suggests that Bing should make a better one, but Bing develops a plan to make 4 million clones of Edd, Matt, Tord, and Tom by using DNA left on their seats to have at least 444 more viewers.

Bing makes the clones, fills up the theatre, and runs his movie, with a Tom clone getting sent to a room full of defective clones for not seeing how a joke is funny. When Bing sees the clones leave the theatre at the end of the movie, he blames Larry for not thinking this through.

After an army of Edd clones pass by Dom, who greets them all; the clones, led by an Edd clone, decide to go to the arcade (after throwing away a Tom clone for suggesting shoe shopping), where they wreak havoc. The clones acquire a massive pile of tickets, only to receive a small shark keychain as the prize. In retaliation, they set the arcade on fire. The clones decide to go home, after throwing another Tom clone to a dumpster for suggesting kitten shopping.

Bing and Larry set off to look for the clones. After being unable to find the clones, with passerby pointing them towards a nearby twin convention, Larry finds a trail of Edd's cola cans. Bing initially denies this, but he ultimately decides to follow the trail.

The real gang is watching TV when the doorbell rings. Matt opens the door, causing a wave of clones to burst into the living room, much to Edd and Matt's shock and Tom's excitement. Edd goes to get Cola from the refrigerator and invites the clones for a drink. They reach for the Cola and an Edd clone takes the Cola can from Edd's hand. Edd gets angry and kills the clone with a shotgun. The other clones proceed to attack Edd until Tom, Matt and Tord intervene and a massacre ensues.

Meanwhile, Bing notices that the trail of cans ends by a sewage drain. He deduces that all the clones must have crawled into and spread throughout the sewers to establish an underground civilization. There, the clones would get superpowers from the raw sewage and use those powers to enslave mankind within a thousand years time. He gets interrupted by an Edd clone flying out of Edd's house.

As the gang finishes off the rest of the clones, Bing and Larry step into the house, intending to dispose of the clones, but they quickly notice the carnage. Just then, Matt and a Matt clone that managed to survive the massacre step in. The gang, unable to tell the two apart, decides to throw Tom into the trash can and have the Matt clone wear his clothes. Everyone laughs, but Larry eventually snaps and shouts "How do you morons even breathe?!" 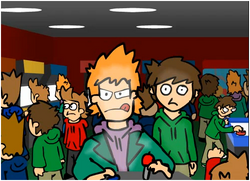 Retrieved from "https://eddsworld.fandom.com/wiki/Spares?oldid=64300"
Community content is available under CC-BY-SA unless otherwise noted.