This is a gallery for Saloonatics 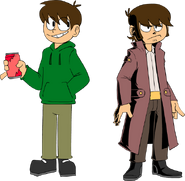 A teaser by Kreid (old animator)

A still by Kreid showing Eduardo, Jon and Mark

Another still by Kreid, showing Edd and Sheriff Thompson

An unused design of Tord revealed by Pearl Zhang on Twitter

Saloonatics reference sheet for Tord
Add a photo to this gallery

Edd walks through the museum

Edd sees the statue of his ancestor

Matt is trapped in a cage

Edd how he appears during most of the Eddisode

Edd is embarrassed by the man's poor wording

But, the man is simply referring to his donkey

"This old saloon looks like a good place to start!"

Tom as he appears during most of the Eddisode

The man's donkey got stolen by bandits

Matt as how he appears for most of the Eddisode

Jon is told to watch Matt

Matt sees Juan's keys and gets an idea

Tom is teaching Edd how to use a gun

A bandit steals a woman's child

Edd tries to stop the bandit...

...but stops the woman instead

The frustrated poker player threatens the other players

Edd tries to stop him, but fails

Edd attempts to save a woman that has been tied to the train tracks...

Edd looks for a wanted bandit

A little girl gets her dog stuck in a tree

...because they are actually bandits

Matt is teaching Juan how to be a prince

Matt, while Juan is distracted, attempts to grab the keys...

... but Juan loses balance of the stack

Edd and Tom return to the saloon after his multiple failures

Edd reminisces about the less serious crime of England 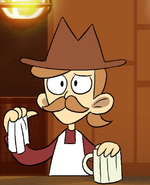 Tom is devastated over the stolen whisky

Edd examines the bottle of cola

Edd drinks the cola and goes on a crime-busting spree

Edd passes out shortly after...

...and awakens to find that he unintentionally cleaned the entire town

...but tells him that no prince would carry around keys and offers to hold them...

...but before he give the keys to Matt, the sheriff arrives and Juan is called

In his anger, Matt accidentally punches the door open

They start to open fire on Edd and the sheriff

The Sheriff tosses the cola to Edd

The sheriff tells Edd to drink the cola

...and shoots Eduardo in the knee

Eduardo, Jon, and Mark are arrested

Edd tells the sheriff the he's always welcome in England

Edd is satisfied with the ending of the story

Edd notices the bottle of cola

...and promptly gets sick due to the age of the cola

Add a photo to this gallery
Retrieved from "https://eddsworld.fandom.com/wiki/Saloonatics/Gallery?oldid=60623"
Community content is available under CC-BY-SA unless otherwise noted.