Ringo is Edd's pet cat. She is a small tabby cat with green eyes, gray fur and black stripes. Ringo is generally depicted as having a friendly demeanour and is very docile, especially around Edd.

Ringo is named after Ringo Starr, who was the drummer for the band The Beatles.

Ringo's first appearance was in Cats Sleep Anywhere, an animated version of the 1957 poem of the same name written by Eleanor Farjeon.

Ringo was mentioned briefly at the end of 25ft Under the Seat when Tom apologizes for "breaking" Edd's cat. When he realizes they weren't going to die, he retracts the apology.

Ringo makes an appearance in The Snogre, she can be seen near one of Matt's snowmen.

Ringo reappeared in Fun Dead at the start of the episode, while Edd, Tom, and Matt are watching TV.

Ringo is seen in Mirror Mirror, entering the cat flap when Edd destroys the door with his newly-bought sword.

Ringo later appears in the final scene of part two of The End sitting on Edd's lap while the gang watches "Return of the Insane Zombie Pirates from Hell 5", having survived the destruction of the house by Tord's robot.

The Snogre, on the side around snow Matts. 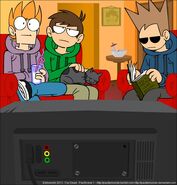 Fun Dead, flat on her face

The End (Part 1), being filmed

Comic, stealing and selling Edd's art
Add a photo to this gallery
Retrieved from "https://eddsworld.fandom.com/wiki/Ringo?oldid=63624"
Community content is available under CC-BY-SA unless otherwise noted.