Paul ter Voorde was a friend of Edd Gould. He is also the creator of Super Mario Reloaded, a Mario-themed parody of a scene in The Matrix.

Paul was the main animator for most of Space Face, Fun Dead, Date Night, The Snogre, and part one of The End.[1][2] The tablet shown in Paul's Fun Dead timelapse is a Wacom Cintiq 12WX previously owned by Edd. Edd's mother had given it to Paul after Edd passed away. 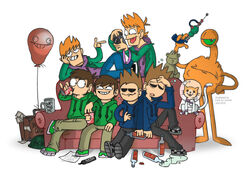 The differences of style between Edd Gould and Paul ter Voorde, drawn by the latter on 30 July 2012.
Add a photo to this gallery

Retrieved from "https://eddsworld.fandom.com/wiki/Paul_ter_Voorde?oldid=64485"
Community content is available under CC-BY-SA unless otherwise noted.