Patryck (credited as Patryk the Pilot in The Snogre) is a character who makes a few cameos throughout Eddsworld: Legacy's animations. He is voiced by and based on Patryk Dudulewicz (pronounced "Dud-doo-leh-vitch"), an Eddsworld Legacy Donator.

In The Snogre opening scene, he was flying a plane with Paul. They crash the plane into a cloudberg.

In Fun Dead, he is seen with Paul on TV as they attempt to stop the zombeh apocalypse. He is also seen injured leaning on an arcade machine in the arcade sequence with Tom.

In part two of The End, he arrives with Paul to pick up an injured Tord after the destruction of his robot. He is also seen in a picture frame in Tord's lab.  He is allied with Tord and Paul. 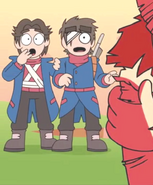 Retrieved from "https://eddsworld.fandom.com/wiki/Patryck?oldid=62372"
Community content is available under CC-BY-SA unless otherwise noted.