The Old lady, Old Lady Grandmado or Grandmado was Eduardo's grandmother. She debuted in WTFuture and made a minor reappearance in "The End".

In WTFuture , Old Lady is pushed aside by the Rude man, who gets shot by a laser shortly after.

In part two of The End, she made a brief appearance in the supermarket where Edd places her on the top shelf next to a jar of Pickles. 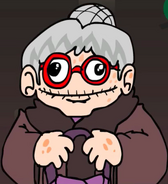 Retrieved from "https://eddsworld.fandom.com/wiki/Old_Lady?oldid=60692"
Community content is available under CC-BY-SA unless otherwise noted.