Moving Targets is an eddisode released on July 2, 2008. It involves the gang joining the army in hopes of getting a vacation.

The gang is stuck at home watching TV and trying to plan a vacation with little money. As they do so, they watch a British Army commercial, which lists the benefits of enlisting but also contains the message of likely falsehood, and decide to enlist. After signing a contract, everyone is in the army.

Edd quickly regrets his decision to join as Sergeant "Hillary" Hilarson drills them. The group goes through several training courses including target practice, chopper piloting, terrain climbing and crossing, and rifle assembly. They also go through changes such as Tom getting "Steve" (his hair) shaved off. The four go running over tires, crawling under barbed wire, hoisting themselves on a zipline over more barbed wire, assembling AK-47 assault rifles, and shooting at targets while a remix of "Johnny, I Hardly Knew Ye" plays in the background. At their passing-out/graduation, Sergeant Hilarson states his proudness of them and in his vision, sees them as Ramboesque killing machines, when in reality, they're still the same old selves they had been the whole time.

They are then seen being flown into enemy territory in a Chinook Helicopter. Tom and Matt lament on how they're being sent to war so soon and how their training took only 1 minute, 34 seconds, which was how long the training scene was, minus Hilary's exaggeration. But as Edd tries to cheer everyone up with a motivational speech, he accidentally hits the cargo door button and the gang goes flying out. Everyone pulls their parachutes except Tord, who uses a jetpack and burns everyone in his way. They eventually land in the enemy base. They look for means of escape and find a tank. Everyone goes in and gets stuck inside the tank. Matt sits at the controls and sends the tank on a rampage.

They drive out of the base and meet up with Sgt. Hilarson. When Edd asks where all the bad guys are, he realizes the enemies and their base have already been destroyed. "Hillary" is quite surprised and most likely sends them all home right after.

(The intro begins as normal, but it then transitions to a musical opening with a camo background. After the opening, the scene begins in the living room. Matt and Tord are watching TV boredly while Edd counts coins and Tom looks at a vacation brochure.)

Tom: So, where can we go on holiday this year?

Edd: I don't think we'll be able to afford anything.. Good.

(Suddenly, everyone's interest moves to the TV as an ad for the army plays.)

TV: Want cash? Need a holiday? Then join the army! Filled with fun activities, friendly faces, 5-star accommodation, fantastic food and drink, and best of all, it's all FREE! So, hurry down to your local recruitment center and sign up today! (fast) Warning: Most of the preceding statement was false or just for entertainment purposes.

(After the ad, everyone smiles.)

Edd: There's no way we're gonna regret doing this, not in a million years!

(The screen turns to black as white text comes up that says "Substantially less than a million years later". This line is narrated. After the black screen, the scene cuts to Edd, Matt. and Tord in army outfits. Unlike Edd and Matt's helmets, Tord has a black and gold one. Tord is also the only one smiling.)

(Sgt. Hilarson walks over to them.)

Sgt. Hilarson: I am Sgt. Hilarson, your senior drill instructor. From now on, you will speak only when spoken to, and the first and last words out of your ugly, filthy, crusted pie holes will be Sir! Do you worthless maggots understand?!

Edd: Sir! Can I call you Hillary? Sir!

(Sgt. Hilarson makes an angry expression. He punches Edd, causing him to launch far away.)

Sgt. Hilarson: I will be training your worthless excuses of bodies over the course of the next-GOOD GOD SON! What do you call that sorry state of a haircut on your head?!

(Sgt. Hilarson knocks off Tom's helmet to reveal his spiky hair. He grabs Tom by his hair. and throws him into a barber seat. The barber starts up a razor and cuts off Tom's hair.)

Tom: Sir! I feel like a shaved bowling ball, Sir!

(The scene cuts to a montage of everyone training. The first training begins with everyone tiptoeing through tires. Next is them crawling through a small space under a layer of rope. After that, everyone is seen moving along rope by using their hands above barbed wire. Everyone is then seen getting their own AK-47s, except for Matt, who gets a Rubik's Cube. Everyone shoots at dummies that are set up, mostly missing and hitting the wall. Someone throws their boot at the dummy and another throws a grenade, causing the dummy to explode. End of montage. The next scene cuts to Edd and Matt in a helicopter.)

Matt: But we don't know how to fly a helicopter!

(Edd flies the helicopter upwards as he continues to sing. Cut to Sgt Hilarson, Tom, Tord, and Matt marching on the ground.)

Sgt. Hilarson: (singing) I DON'T KNOW WHAT I'VE BEEN TOLD!

Everyone: (singing) I don't know what I've been told!

Everyone: (singing) Stainless steel is hard to fold!

(Scene cuts to Tom and Matt cleaning the floor with toothbrushes. Sgt. Hilarson is watching them.)

Sgt. Hilarson: I don't want to see you stop scrubbing these floors until I can see my face in it!

(Cut to Edd drawing Sgt. Hilarson on the floor with a permanent marker. His drawing is labeled "Hilary". He turns around smiling, only to find out Sgt. Hilarson is right behind him. He is then seen being launched out of the roof.)

(Another montage begins of everyone training. The first obstacle is for everyone to jump over a wall. (assumingly Edd and Tom) do so successfully, but (assumingly Matt) runs into the wall and falls. Tord jumps over who is assumed to be Matt. The wall falls over. Up next is everyone sliding on rope. However, they stop moving and Matt bumps into them. The next scene shows everyone practicing their shooting again. The first dummy is shot moderately well. The second dummy is shot perfectly. The third dummy is shot in the side of the head. The final two scenes show everyone with a shot with their weapons and someone being run over by a burning car. End of montage.)

(The next scene shows Sgt. Hilarson looking at everyone happily.)

Sgt. Hilarson: I'm so proud of you guys!

(A shot is shown of everyone holding their AK-47s with a serious face, except for Tord giving a menacing smile. Everyone is also shown to be very muscular, practically breaking the buttons on their jackets. Sgt. Hilarson sheds a tear. In reality, however, everyone is standing there confused. They look at each other, except for Tord, who is watching Tom point his gun at his eye with a shocked face. The scene cuts to the gang in a helicopter.)

Matt: I can't believe we're already being sent to war.

Tom: Yeah, has anyone else realized we only trained for like 1 minute, 34 seconds?

Edd: Well, I'm glad they're sending us off to fight so soon! This is our chance to show the world what we're made of and how far we've come! Our chance to prove once and for all that we're not just a bunch of incompetent buffoo-OOPS!

(Edd accidentally presses the 'Door Release' button, causing everyone to fall out of the helicopter screaming. They pull their parachutes, except for Tord, who flies down with a jetpack, causing everyone and their parachutes to be burned. Just as Tord is enjoying himself on his jetpack, it flies off without him. He blinks and begins to fall very quickly. Everyone, still burned, also falls. The next scene reveals that they are falling into the enemy base. Tord is the first to fall, and he lands on a see-saw to break his fall. Everyone else falls on the other side, almost causing the see-saw to launch Tord into the air. However, it snaps.)

(Just as Tord calms down, a hippo falls on him. Tom gets up and sees that they have landed just a distance away from a tank.)

Tom: Last one in is a steam-powered fish cake!

(The scene cuts to a guard and Paul inside the base.)

Guard 1: Did you hear something?

Paul: It's just the sound of NO ONE CARING!

(Matt closes the door to the tank.)

Edd: Not much room in here.

Matt: God, I can't see anything in here!

(The tank begins to move. It infiltrates the enemy base and fires blasts at random.)

Tom: Hey, what does this button do?

(The tank then fires an explosion. Multiple people are heard screaming. The tank continues to fire explosions. The scene cuts to everyone in the darkness of the tank.

Edd: Aww, we can't even see where the controls are.. I'm getting out.

(Edd opens the door to the tank to see Sgt. Hilarson with a shocked face.)

Edd: Oh, hey there, Hilary! So, err, where are the bad guys?

(The next shot shows that the gang has destroyed the enemy base, Explosions are seen still coming from there. The building is now falling apart.) 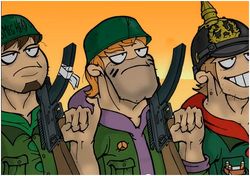 In a 2008 blog on eddsworld.co.uk, before the Eddisode's release, Edd made a blog post 5 minutes before its upload informing the viewers to "get their fill of Tord" while they can. This is because Moving Targets is the last episode Tord Larsson was involved in.

Retrieved from "https://eddsworld.fandom.com/wiki/Moving_Targets?oldid=64782"
Community content is available under CC-BY-SA unless otherwise noted.