25ft Under the Seat

Matt Sucks is an animation by Edd Gould. It was uploaded to Newgrounds, DeviantArt, and YouTube.

Matt goes trick-or-treating while dressed as a rabbit, despite being too old and getting twelve restraining orders. A passing vampire bites him, and Matt turns into a vampire himself.

Matt flies to his house, crushing a bat upon landing. He teleports into the house and approaches Edd to bite him. However, he walks into a mirror, as he has no reflection, and he corrects himself. As he is about to bite Edd, he tells him "dinner and a movie first, buddy". Matt reluctantly goes along and has another go for Edd's neck before being thwarted again.

Matt goes to a dimly-lit computer room and bites what appears to be Tom sitting in front of the computer. The real Tom steps in and sees Matt biting a pile of garlic, which causes Matt to recoil in shock. A terrified Tom runs to Edd and tells him that Matt's a vampire. Tom then builds an unstable Mega Stake Machine Gun|stake machine gun, which ends up killing them both.

Matt walks in on Edd and Tom's corpses and gets disappointed that he didn't get to kill them both. He decides to go outside for a walk, but he explodes.

The Newgrounds version uses music from Jaws by John Williams, while the DeviantArt and YouTube versions use music composed by Kevin MacLeod.

The title in the episode.

Matt meets a vampire which bites him.

Matt runs straight into a mirror.

Both end up going to a dinner and movie. 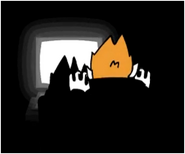 Matt closes in on Tom.

Both of them end up getting killed.

Matt about to explode.

What happened shortly after.

Tom watches as Edd gets impaled by stakes.

Edd killed by the Mega Stake Machine Gun.
Add a photo to this gallery

Retrieved from "https://eddsworld.fandom.com/wiki/Matt_Sucks?oldid=64273"
Community content is available under CC-BY-SA unless otherwise noted.