Mark is one of Edd's neighbours. He lives with Eduardo and Jon.

Marco is Mark's ancestor and a bandit who teams up with Eduardo and Juan in Saloonatics. He seems to understand English despite speaking only Spanish, much to Eduardo's frustration. He was voiced by Eddsworld: Legacy donator Chris "KKortez" Cortez.

Mark in a crowd of zombies.

Mark in a crowd of zombehs...again...

Mark as a child in a flashback from PowerEdd 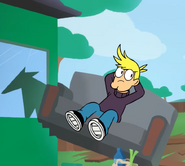 Mark in The End

Add a photo to this gallery
Retrieved from "https://eddsworld.fandom.com/wiki/Mark?oldid=64309"
Community content is available under CC-BY-SA unless otherwise noted.