Mario is a fictional video game character created by Nintendo developer Shigeru Miyamoto. He first appeared in the arcade game Donkey Kong in 1981. One of Edd Gould's animations, Mario Madness, centers around Mario.

Some of Edd's animations and comics as well as Eddsworld: Legacy contain Mario-related references.

This World of Edd

25ft Under the Seat

References in the Stuff Menu 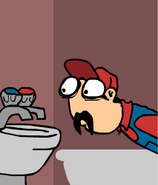 The Mario-esque plumber looking at Edd's sink from Comic 157.

Luigi as a Ghostbuster in the back from Eddsworld Halloween Special 2007.

Paul and a co-worker wearing Mario-esque overalls and undershirts in Climate Change. 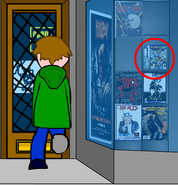 Mario & Luigi: Superstar Saga available on display in the window of the store from Edd Again.

Mario's face from the "Lots of faces" drawing. 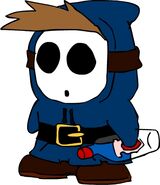 Tom as a Shy Guy, holding an empty bottle.

Two copies of New Super Mario Bros. 2 and a copy of Mario Kart 7 are on the shelf in the upper right corner

The "130985 SMB" license plate
Add a photo to this gallery
Retrieved from "https://eddsworld.fandom.com/wiki/Mario_references_in_Eddsworld?oldid=57562"
Community content is available under CC-BY-SA unless otherwise noted.