Hellucard has appeared in the Eddsworld series many times with his famous line, "Hey, Edd!" (although it sounds like ("Ey Hedd!").

He wears a black t-shirt sometimes portraying a skull on it as shown in WTFuture and blue jeans. He also has a Canadian flag on his space suit in the opening of Space Face.

Hellucard seems overall kind and persistent, and seemingly a huge fan of Edd since he's always sure to greet him whenever he gets the chance. He is also portrayed as rather dumb, as he quite plainly appeared not to notice the fact that a large group of Edd clones were passing by him repeatedly in Spares, or when he greeted Edd and Future Edd in WTFuture.

He has died twice. Once in WTFuture, where Future Edd killed Hellucard by throwing him through a glass door, and again in Space Face where it appears he was shot through the head by Paul, later only returning as a zombie in Fun Dead. A female counterpart of Hellucard appeared in the gender swap universe alive, and Hellucard reappeared in the comic "Head" alive and well, suggesting that his death may not have been permanent, as has been the case with other characters. 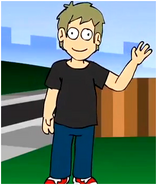 Hellucard gets killed by Future Edd.

A dead Hellucard floating in space with Paul.

Close up of zombie Hellucard

Hellucard as a female in Mirror Mirror"

Hellucard's cameo in Trick or Threat

Hellucard in the comic "Head"
Add a photo to this gallery

Retrieved from "https://eddsworld.fandom.com/wiki/Hellucard?oldid=61059"
Community content is available under CC-BY-SA unless otherwise noted.