This World of Edd

Hello Hellhole is an eddisode made in January 2007. It features Edd, Matt, Tom and Tord visiting Hell.

After Edd brings pizza from Pizza Butt, Edd and the gang are about to watch a movie called "Return of the Insane Zombie Pirates from Hell III". But before the movie can start, the TV screen explodes.

With nothing left to do, Tord wonders if they could ever visit Hell. Edd just laughs it off, but then everyone (except Matt) thinks that would be a great idea. Searching on Google for the tickets to Hell, they click on a link and an elevator from Hell (AKA the Hellevator) appears. While waiting in the elevator for a long time, the Hellevator goes at max speed, spinning around and falling down to Hell. Once the elevator lands, they head toward the tourist door. Everyone but Tom enters because the door slams shut before he could get through. Tom enters though another door with a sign saying "Jehovah's Witnesses". The area that he appears in is a white void.

Back with the rest of the gang, they start sightseeing. They see people running around being chased and tortured by demons and visit the Sinner Squishing Room, where a devil squashes sinners with a mallet.

Back at Tom, a pencil suddenly appears and draws a slide a few meters below him. It pushes Tom to fall on the slide, making him slide down the line it drew.

Back at the gang, they decide to get some food from Zombee's Cafe where everyone that works there is a zombie. The menu contains dishes that no one would want to eat. Matt then discovers that he is on the menu. After waiting and ordering drinks, the zombie waiter brings drinks that were actually blood. Matt's drink contained a fresh eyeball. Edd notices Tom missing but then Tom comes out of nowhere falling on the restaurant table.

The gang follows Lucifer to their "personal Hells". Edd's is a broken Coke machine (or a world without Coke). Matt's personal Hell is being surrounded by 5 Edds. Tom's is meeting a black man who is actually an alien. Tord's is a jukebox that plays "Sunshine, Lollipops and Rainbows" by Lesley Gore, no matter what button he pushes, and when he breaks the jukebox, the song just plays louder.

Before leaving, they buy gifts from the gift shop. The film ends with the gang leaving Hell, and Lucifer says "See you in 6 months!", shocking Tom.

(The eddisode begins with an intro depicting Edd carrying a box of pizza to Tord and Matt, who are boredly watching TV. They open the box to show the title.)

Edd: So, Tord, what movie did you get?

Tord: Oh, it's a classic! Return of the Insane Zombie Pirates from Hell Three!

(Tord throws the DVD to Tom, who catches it. He puts it into the DVD player. The movie begins by showing a logo for Puniversal, however the TV catches fire and breaks.)

Edd: Well that was... eventful. Now what are we gonna do?

Tord: Hmm...Wouldn't be fun if we could go to helllllll?

Edd: Hahaha, yeah. But how would we find out how to get there?

(Suddenly, light bulbs shine over everyone's heads, except for Matt's, whose head shows a hamster running on a wheel. Cut to the computer screen, specifically Google, where Edd googles "how to get to hell". As everyone is watching around him, he clicks the third result which says "Click here to go to Hell instantly". An elevator for Hell rises out of the ground and into the house.)

(Everyone runs into the elevator instantly, except for Matt who walks in with an annoyed face.)

(Everyone stands boredly in the elevator as it moves and calm music plays. Edd looks at his watch. In reality, however, the elevator is dropping very quickly and moving in all directions while rock music plays. The gang is still unphased by this as the calm music continues to play. The elevator finally drops and lets everyone out. The same scenario happens as when they entered, everyone runs out happily while Matt walks out annoyed.)

(Everyone walks to a door which labels as "Tourists" and goes inside, except for Tom, who has to go through a door labelled "Jehovah's Witnesses". )

(When Tom enters the room, it's completely blank.)

(Cut to Edd, Tord, and Matt looking down a cliff. Matt is holding a camera and taking pictures.)

Tord: So this is hell. What a sight.

(Rock music begins to play as the bottom of the cliff is shown to be quite hectic. People with severe injuries are seen running around in fear, one of which is being chased by a devil with a hockey mask and a chainsaw. Another is running from what is assumed to be a dinosaur. In the background, many devils and burning people are seen in fire. Cut to the three watching a devil squash "sinners." Cut again to Tom in the white room. A pen approaches him and draws a line.)

(The pen readies to push him into the line.)

Tom: Hey, hey, what are you doing? Hey, no, don't do that! Stop-OH CRAP! Wooooaaaaahhhhhhh!!!

(Tom is now sliding on the line.)

(Cut to the three walking to a café.)

Edd: Hey, let's get something to eat!

(Cut to inside the café, where it's mostly empty. A zombie waiter walks over to them and groans.)

Edd: Yes, thank you, we'd like to see the menu.

(Matt and Tord look at menus.)

Matt: Hey, wait a minute, why am I on the menu?

(Cut to Tom still sliding down the line screaming.)

(Cut back to the gang in the cafe. The zombie waiter brings them cups of blood. Everyone looks at their drinks suspiciously, with Matt finding an eye in his.)

(Tom falls in from the ceiling, still screaming.)

(Everyone sits in surprise as Tom is now on the table. Cut to everyone walking into a room labelled "Personal Hells".)

(As they walk through the room, they are greeted by Lucifer at a lobby desk. Glass is heard breaking.)

Lucifer: I am Lucifer, lord of Hell!

Edd: Can we call you Lucy?

Lucifer: No! Now follow me to your own PERSONAL HELL!

(Cut to Edd approaching his personal Hell. He walks inside to find himself at a cola vending machine. He puts in a quarter for a drink, however, nothing happens. He slams the door shut and shakes with fear. Next is Matt, who is greeted by multiple variants of Edd.)

All Edds: What's up?

(Matt screams as he slams his door shut. He, too, shakes in fear. After Matt is Tom, who is met with a black man.)

(Tom slams his door shut, shaking with fear. Finally is Tord, who is encountered by a jukebox. He presses the play button only to find it plays his most hated song, Sunshine Lollipops. He presses the button again, but it repeats the song. He does this multiple times for the same result. He eventually punches the jukebox until it breaks, muting the song. Just as he smiles with relief, the song begins to play again, catching him by surprise. He slams the door and, like everyone else, shakes with fear. Cut to Lucifer reading a book as the gang walks away, traumatised.)

(After they visit the gift shop, they walk through an exit.)

Demon: Bye-Bye! Visit again soon! Thanks for visiting! See you in six months!

(The demon closes the door.) 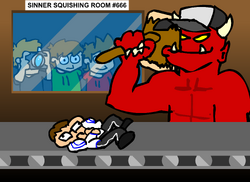 Retrieved from "https://eddsworld.fandom.com/wiki/Hello_Hellhole?oldid=64529"
Community content is available under CC-BY-SA unless otherwise noted.