Eduardo is one of Edd's neighbors and his primary rival. He lives with Mark (and previously Jon) and has a rivalry with Edd.

He has a resemblance to Edd, the differences being Eduardo has peach fuzz facial hair and a dark green button-up shirt with a light gray undershirt instead of a green hoodie. Eduardo is confirmed by crew in a Patreon Event to be Hispanic. He is depicted with darker skin tones in PowerEdd and Saloonatics. Eduardo also has a protruding chin, which in PowerEdd exclusively, is shown to have a cleft. In addition, Eduardo is frequently depicted with dark circles under his eyes and noticeably rounder teeth in comparison to other characters who have square teeth.

Eduardo is shown to be rude, arrogant and confident in many ways. He believes that he is superior to Edd in every way, spending much of his life attempting to outdo him in everything, from house extensions to satellite dishes and even superpowers. He is also the most antagonistic of the gang, as he would not only make fun of Edd and the gang at every opportunity, but also push Jon around.

According to a flashback scene in PowerEdd, his rivalry with Edd stems from an incident in primary school. Eduardo has a detailed painting of a duckling as his entry to his class's art contest, while Edd has a crude drawing of himself as a superhero as his entry. Edd wins the contest and the entire class taunts Eduardo for coming in second, which is why Eduardo spends most of his time trying to outdo Edd in everything.

Despite his general antagonism towards Edd, his gang, and even his own friends, he has some moments that suggest that he can be caring at times. The comic "Ex-Girlfriend", shows that he was once in a relationship with Laurel, and his wistful sigh implies that his relationship with her was, at least largely, a happy one[1]. In Part One of The End, he angrily wishes that Jon was dead, but he does not take it well when Jon really dies in Part Two. In Beaster Bunny, he is visibly depressed about it, to the point he has become somewhat shut-in. In addition, he was also surprised and amazed when Edd apologizes for making fun of him in primary school, because even he admits that Eduardo deserved first place for the picture.

In contrast to Edd, Eduardo has a preference to Diet Coke and dislikes Regular Coke. In a flashback scene in Hammer and Fail: Part 1, there was a mix up in which Edd got Diet Coke and Eduardo Regular Coke. This mix-up apparently reignited their rivalry.

Eduardo bragging about his "renovation" to Edd.

Eduardo telling The Ghost to leave his house.

Eduardo on a spaceship with Mark and Jon in Space Face.

Eduardo showing off his nuclear-powered TV antenna to Edd in PowerEdd.

Eduardo as a toddler in PowerEdd. 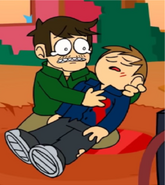 Eduardo mourning to Jon's death in The End (Part 2).

Eduardo looking sadly at a picture of his ex-girlfriend, Laurel.

Eduardo and Mark in Beaster Bunny.

Eduardo, as a toddler, presenting his painting of a duck in PowerEdd.