The Eddsworld Halloween Special 2007 is an Eddisode released on October 21, 2007. It was made as part of Newgrounds' 2007 Halloween Flash Competition and eventually took ninth place in the competition. It featured Edd, Matt, Tom, and Tord trying, and failing, to escape from an axe-wielding maniac.

The episode starts off with Edd looking around and getting hit by a jack-o-lantern. Edd tries to get the pumpkin off but it was stuck to his head. While Edd wanders around blinded by the pumpkin, Matt sees him and hits Edd in the head with a sledgehammer, decapitating him.

It continues with Edd and the gang at Edd's House. Tom is reading a newspaper, Edd and Tord are playing Zombies Ate My Neighbors, and Matt is watching them. Edd hurls an insult to the Hockey Mask Wearing Freak he just blasted in the video game. Suddenly, the monster blasts his way into the house through the wall. He roars at them, causing everyone to scream for ten seconds. Everyone then runs away into the next room while the monster throws two axes that misses them.

While hiding behind a wall, Edd looks over the doorway. Tord asks him if the coast is clear, but Edd replies "Nope" and it's revealed that the top part of his head has been sliced off. He falls to the ground with his brain flying off his head. The monster catches up to them and makes a hole in the wall. Everyone runs and hides. They manage to fool the monster. Matt hides behind some curtains and Tom wears a lampshade on his head. The monster stops at Tord who is holding up a picture frame and smiling, unaware that the real Tord is actually sneaking away from him.

Tord meets up with Tom. Tom reassures him that they lost him when a sword stabs him in the back. Tom questions "Since when did axe-wielding maniacs carry around swords?" The monster drags the sword out of Tom, causing a spurt of blood to splash all over Tord. The chase ensues when Tord and Matt run down the hallway. Matt runs into a closet with Tord following him. Tord then pushes Matt out of the closet and locks the door, causing Matt to bang on the door in panic to get in. The monster catches up to Matt. Matt kicks the monster in the balls and slowly backs away. Unfortunately, he backs into the basement stairs and falls down. The monster kicks the door of the closet down. He approaches Tord, taking the cap off the bottom of the axe, revealing a stake. He stabs and kills Tord while he screams in terror.

After killing everyone, the monster cleans the blood off his axe while whistling. Edd's ghost taps his shoulder and pulls his mask and releases it, knocking him out. Tom and Tord's ghost float over to Edd as he wonders where Matt went. Matt comes up from the stairs, injured and bloody. He notices the rest of the gang's ghosts and immediately dies from a heart attack. The scene changes to Edd, Matt, Tom and Tord carrying the monster over the city. They throw him off a cliff where his head gets impaled by a spiky rock. The monster's giant red ghost then rises up to get revenge on them. Suddenly, a ghost trap is put underneath them and everyone gets sucked in. The Ghostbusters are then seen along with Luigi.

"What the? Since when do axe-wielding maniacs carry around swords?" - Tom

The title of the episode.

Everyone's doing their own thing.

Everyone runs for their life.

"Is the coast clear?"

"What the? Since when do axe wielding maniacs carry around swords?"

Matt and Tord run for the closet. 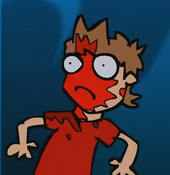 Tord pushes Matt out of the closet.

Matt falls down the stairs.

Edd gets his revenge on the maniac.

Everyone carries the maniac to a cliff.

The maniac gets killed by a spiky rock.

The maniac's ghost comes back for revenge.

A ghost trap starts to suck everyone in.

Ghostbusters! (and Luigi)
Add a photo to this gallery

On March 4, 2016, the Special was uploaded to the Eddsworld: Legacy channel on YouTube with a new score by Marc Lovallo.

Retrieved from "https://eddsworld.fandom.com/wiki/Eddsworld_Halloween_Special_2007?oldid=64353"
Community content is available under CC-BY-SA unless otherwise noted.