"Does that make me CRAZY?"

Mewfoxgirl (aka Coco) has appeared as a background character in many of the Eddsworld flashes.

Coco makes cameo appearances in a lot of eddisodes (mainly the Zombeh series), but had larger roles in Does that make her crazy? and Eddie's Teddy. She also had a speaking line in Eddsworld 20k and her name can be seen on Zanta's good list in Zanta Claws. Coco was a good friend of Edd's and still makes cameos today. Coco is also seen among the heads of Edd's friends in Eddsworld: Legacy. She also appears in a commercial for ASDFLand during the events of Fun Dead. She is once again wearing her cat ears.

Coco in Does that make her crazy?. 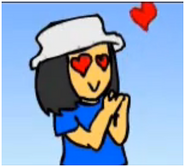 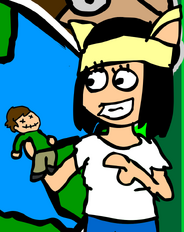 Coco in Eddsworld 20k.
Add a photo to this gallery
Retrieved from "https://eddsworld.fandom.com/wiki/Coco?oldid=63380"
Community content is available under CC-BY-SA unless otherwise noted.