Climate Change is an animation created by Edd Gould for the 2009 United Nations Climate Change Conference in Copenhagen. The conference, along with this animation, was created to promote awareness of climate change. The animation itself was uploaded to the tv/e channel on October 12, 2009, while a video directing viewers to the animation was uploaded to Edd's channel two days later. It features Edd, Tom and Matt saving the world by stopping a giant tsunami that they caused to happen through their overuse of electricity.

Edd is at his house reclining on a couch with several electric fans surrounding him and several electronic devices. Tom attempts to plug something in, but all the outlets have plugs. Tom tries to explain that overuse of electricity would accelerate global warming, but Edd refuses to believe him.

Meanwhile, at the power plant, the electrometer has gone through the red zone. One worker points this out, but his co-worker doesn't care. Just then, a tuft of greenhouse gas emits from the exhaust vent and travels to the Arctic where already, other clouds of greenhouse gas are floating around. A chunk of ice breaks off and falls into the ocean, producing a giant tsunami.

Back at Edd's house, all the TVs Edd is watching lose their reception. Matt hears rumbling, and Edd, Tom and Matt rush outside. Edd, thinking Tom was referring to Hellucard, doesn't believe him. Tom grabs Edd's head and tilts it to look at the raging tsunami tearing through London, heading towards their house.

Tom quickly convinces Edd to unplug all the electric devices before it's too late. Edd rushes inside to unplug everything while Tom stays outside doing wacky things in the face of the tsunami, such as ordering pizza, looking at the wave with 3D glasses, and playing hide and seek with the tsunami. Edd finally pulls the last plug, and the tsunami stops just millimetres from destroying the gang's house. Edd walks outside and the tsunami goes backwards through London, repairing all the damage it caused.

Tom then tells the gang (and possibly the audience) to stop overusing electricity, "because if we don't, we are ALL. GOING. TO. DIE!" They slide back inside and a rainbow arches their house. A bystander criticises what he just witnessed, but is interrupted by the sight of another tsunami.

All of the electricity Edd is using.

Tom starts to explain how bad overusing electricity is.

"Somebody, somewhere sure has been using a lot of electricity."

"Annnnnnd your point is?"

A greenhouse gas cloud heads toward the Arctic.

"Holy hot dog and a toaster! It's a giant wave!"

The giant wave destroying everything in its wake.

"Quick! Edd! Turn everything off before it's too late!"

"TURN EVERYTHING OFF NOW!"

Seconds before their doom...

...Edd pulls all of the plugs out.

The wave goes away.

"You know what, guys? I've learned something today."

Tom elbows Matt out of the way.

Everyone concludes to conserve electricity.

A bystander criticizes everything. 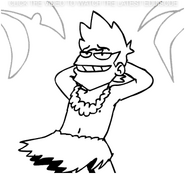 In the redirect video, a clip of Matt doing a hula dance was shown.

This episode was mentioned in an interview Edd and Tom did with the BBC.[1]

Community content is available under CC-BY-SA unless otherwise noted.
Advertisement