I Monster - The Blue Wrath

Bang, Boom, Splat! (stylised as Eddworld's Bang, Boom, Splat!) is a game developed by Edd Gould and Psycosis set in the Eddsworld universe. It was uploaded to Newgrounds and DeviantArt on July 26, 2008.

The game appeared as a physical arcade game in Fun Dead, and on Tord's control panel in The End (Part 2).

Edd was reading the newspaper when he saw an advertisement asking for testers to test a new drug. Edd goes over to the research lab and he is given a pill and a glass of water. He swallows the pill and chugs it down with Coca-Cola. The Doctor tries to tell him that swallowing the pill and Coke at the same time is a harmful combination, but it's too late. Edd's vision goes crazy and he starts seeing the Doctor as a devil. He pulls out a gun and the game starts.

After beating all the main levels, a scene shows where Edd's vision finally clears. A policeman tackles him and he is put in a straitjacket. They stick him into a police car to be taken to the asylum. As the car drives off, a real monster appears in front of Edd and he freaks out.

The game is mostly a shooting gallery-type game so it's based on the score you get on the levels. The mouse is used to aim while the clicking is used to shoot. When you run out of ammo, you press R to reload. You have to shoot the targets indicated by the level's starting screen and avoid shooting the other targets the starting screen says not to shoot. In order to advance to next level, you must get a certain amount of points. Chaining together hits boost the combo. The higher the combo, the more points you get. At the end of the level, you can get special bonuses depending on what you did in the level.

Destroy as many demons as you can in the time limit! (A parody of Doom)

Shoot as many commies as you can in the time limit! Boris Grishenko appears in the elevator in the background, see the gallery picture of Level 2 to see it (A parody of the GoldenEye 007 video game).

Protect your home from a zombie invasion!

Stop the Behemoth of Terror before all is lost.

Rescue the neighbors in Level 1: Zombie Panic (parody of Zombies Ate My Neighbors).

Do you have what it takes to be an agent? Test your skills in Hogan's Alley! (parody of Hogan's Alley for NES)

Money is what I want, get as much coins as you can in the time limit! (Based on the Eddsworld short)

MC Tom is here to drop a bomb! Stop the press from taking photos!

Quench your thirst by shooting as much Cola cans as you can!

How good is your shooting? Find out in the shooting gallery! EDDSWORLD 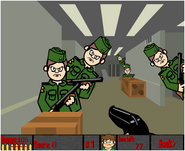 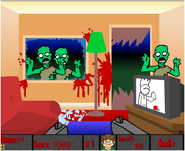 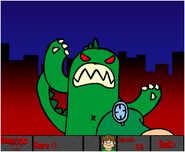 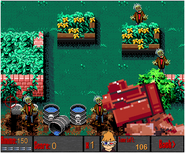 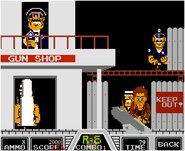 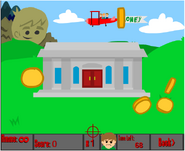 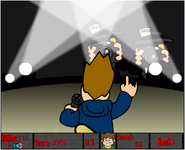 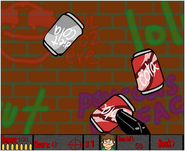 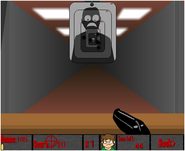 Level one on Tord's control panel from The End

Level 3 Background
Add a photo to this gallery

Ways to unlock each level

Retrieved from "https://eddsworld.fandom.com/wiki/Bang,_Boom,_Splat!?oldid=63617"
Community content is available under CC-BY-SA unless otherwise noted.